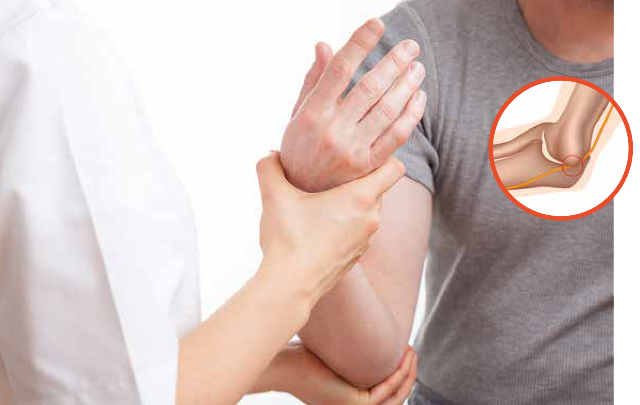 Find a specialist
Make an appointment

Ulnar nerve entrapment (or cubital tunnel syndrome) is the second most common form of nerve compression neuropathy. The cubital tunnel is located inside the elbow joint where the ulnar nerve passes through it.

Causes of the cubital tunnel syndrome?

The first symptoms present themselves as numbness in the fingers, pain in the little and ring fingers, most often in the dominant arm.

Ulnar nerve entrapment is mainly seen in people who keep their elbows bent, lift up their arms or hold their arms in a tight position for long periods on a daily basis while repeating the same movements, thus subjecting their elbows to heavy loads. This mostly occurs in tennis players who have been playing the game for years, IT professionals, office workers, vehicle drivers etc.

IMPORTANT: The sensation of tingling, numbness and pain in your arm should not be neglected because, if left untreated for a long period, the cubital tunnel syndrome causes irreversible nerve damage, excruciating pain and sensory impairment that can result in arm paralysis, incapacity for work and disability.

Prolonged nerve compression results in palm muscles becoming weaker and thinner over time and in the impairment of finger movement.

Doctors at the ARS Medical Centre have different methods at their disposal to help eliminate unpleasant sensations and relieve painful conditions, either temporarily or permanently. Several options are available, depending on the degree of damage to the nerve. In milder cases, drug treatment, anti-inflammatory medications, steroid injections or neural blockade are used. Sometimes physical therapy – ultrasound treatment with a medicinal ointment, magnet therapy, electrophoresis etc. – helps; it alleviates the palm swelling thus releasing the pinched nerve. An orthrosis that holds the arm in the correct position and relieves the pain may be used during the night. However, all these methods have a short-term effect. Surgery is required to release the compressed nerve. This gives a long-term result: an opportunity to work and sleep normally again.

The traditional surgical method or the modern and less traumatic endoscopic method is used to release the pinched nerve. The surgery is performed at the ARS Day Hospital under local anaesthesia. The patient can go home immediately after the surgery on the same day. During the traditional surgery, the cubital tunnel is opened through a small cut in the skin in the palm base (or on the inner surface of the elbow joint) and the compressed nerve is released. A regimen of gentle activity should be observed after the surgery for one month. The endoscopic method is remarkably easier and more comfortable for the patient. A miniature endoscopy camera and microscopic surgical instruments are inserted into the carpal (or cubital) tunnel through a small cut in the skin to release the compressed nerve. This helps protect the surrounding tissue, results in a less painful post-surgery period, faster recovery and regaining of the capacity for work as well as a minimal cosmetic skin defect. An essential advantage of this method is the simple wound treatment which is especially important for patients with impaired wound healing due to diabetes mellitus, problems with blood vessels etc. The period of recovery after an endoscopic surgery is much shorter, too.

Treatment for the carpal and cubital tunnel syndrome is provided by:

Search for a specialist or service